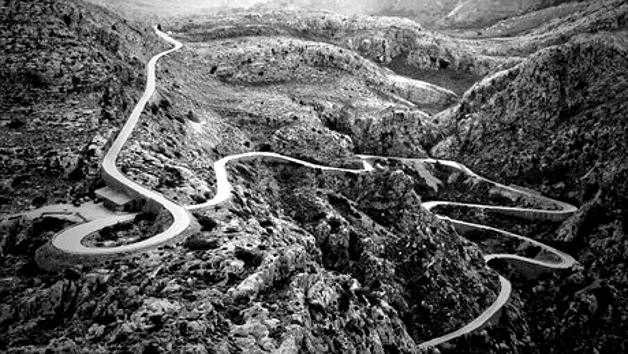 Returning to ride in Majorca was a little like meeting an old friend. We knew one another’s ways, we respected the other yet said little, mutual appreciation unspoken.

For Majorca is a cyclist’s friend, smooth roads, manageable mountains, rolling hills, billions of hairpins, long coastal roads, picturesque rides through orange groves and verdant valleys. Oh and did I mention the weather? Sun, and lots of it.

I’ve already written a love letter to cycling in Majorca and thus it is no surprise I was eager to return. The plan this time was a little more relaxed. No 80 mile beast rides up mountain after mountain for I no longer needed to tick off each of the famous climbs. Besides, I’d not really prepared to ride such herculean efforts due to my recent flirtation with a training plan focused on power over endurance.

Day one, legs not quite fresh but as good as they were going to be, I wanted to enjoy one of Europe’s best cycling roads for photographers and the most famous climb on the rock. Sa Calobra. A road with more twists than a Hitchcock wet dream.

After spinning gently up the dull climb of Coll de Feminia, the snake was next. The child like joy of descending this fantasy road was written large across my face, my grin wider than my handlebars. At the base of the climb swimmers enjoyed the clear cool and unbelievably turquoise waters of an inviting Mediterranean. The swimmers had no idea of the suffering I was about to endure. Neither did I.

The last time I rode Sa Calobra full gas I remember it being over in no time. Too easy almost. Not this time. How I laughed when I first picked up my hire bike and changed into the 32 rear sprocket. How I needed the extra gear on this climb.

The ascent this time was hot and busy. I had arrived late. Coaches everywhere, stalking every hairpin. The sun so strong its rays pounded me into the tarmac and each torturous twist up this climb seemed to last forever. My legs and lungs reproached me for not preparing for such long rides, distracted as I was with my new found hell of intervals. Base miles cannot be neglected, so goes the old adage.

Yet all the pain in the world cannot take away from this wondrous climb. How to explain it? It’s not really the view. Well, actually it is the view. Not of the sea, not of the mountains but of the road itself. Even though you’re riding this asphalt snake you still can’t quite believe it is real. Loop after loop, hairpin after hairpin, you, the cyclist, has died and gone to climbing heaven.

Beast tamed, or at least, beast having chewed me up and spat me out, I descended via Coll de sa Batalla, a great winding climb that allows you to slice through the corners at speed. Cycling in the Alps maybe majestic but riding in Majorca is so much more fun. Especially when you can go for a post-ride swim in the lovely cool sea. All of a sudden you’re a pro taking an ice bath, of sorts. Only with more paddling.

Flat and easy rides in Majorca

Wisely I’d planned a couple of flat days to follow my struggle with the snake, for I knew that a) my legs would be mash (they were) and b) I wanted to discover more of the island (I did!).

Day two took me to the short climb of Ermita de Betlem via the flatlands of Alcudia, Can Picafort and Arta. The short climb was great, very different to the mountains, winding through a valley on a road that leads you to a monastery and little else.

Despite the appearance of a good looking route along the coast, the ride to the climb was dull and a little demoralising, long flat roads with imperceptible inclines and busy with traffic. A route to recommend for time triallests only.

Day 3 and my weary legs were not quite ready for anything, not even a zone 1 scenic discovery of the island’s innards. Picturesque towns like Petra, Sineu and Lulbi awaited. Much to my amazement storms and big rain was forecast for the day. Rain, in Majorca?

Out early, the thick black sky heaved with its cargo. A defiant beam or two of yellow from the sunrise, the turbulent clouds chasing me along the coastal ride, the sky and sea twinkling black and gold.

Astoundingly I avoided rain all morning even though I was surrounded by rain clouds the entire ride. The only drops to hit me were from the roads rather than the sky. The wet tarmac was treacherous, greasy, and so I rode like a deer on ice, avoiding a tumble unlike many unfortunate others. Home, the heavens above sensed I was done and promptly emptied. A satisfying feeling, for it is rare the cyclist cheats the weather gods.

A great half century ride but I would recommend avoiding the detour via Alcudia and instead heading into the isle’s innards to explore more of the lovely little villages.

Petra, Sineu and Lulbi route and ride – Strava and GPX

Back to the mountains

A terrifying day. My legs having abandoned me, I gladly abandoned the bike and joined the dark side, or at least, the shade of a hire car.

A spontaneous decision to hire a car seemed like a good idea at the time but didn’t consider the terror of driving around the wicked hairpins of Sa Calobra with huge coaches swinging themselves at you. My legs were rested but not my heart. Not recommended.

The best ride in Majorca. Sure, the Sa Calobra is epic in all senses of the word, yet as a ride, the short journey to the Formentor lighthouse offers much more. Why?

An upcoming blog post will describe this ride in a little more detail. All I will say now is, as with most Majorcan tourist roads, ride it early or late to avoid the masses of traffic.

Should I go cycling in Majorca?

Of course. Everything is easy but the rides! Hire a bike and get a cheap hotel. Done! You can even refuel fairly cheaply at the less fancy restaurants or better still stay on your sea view balcony with a rotisserie chicken and hot spuds from the supermarket. And a lovely Rioja of course. Perfect.

You can read more about the best routes and climbs in Majorca, when to go, where to stay and how to get to the outdoor velodrome in my original blog post. Feel free to ask any questions below the line.

14 thoughts on “A return to Majorca – Flat rides, hard rides”